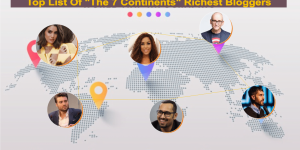 It’s one thing to start a blog, another, to like the act of doing it and always finding the motivation to do it; come rain, come sunshine.

I have come up with the list of top most earning bloggers of the planet Earth, each representing their continents.

Antarctica, the southernmost continent and site of the South Pole, is a virtually uninhabited, ice-covered landmass. Most cruises to the continent visit the Antarctic Peninsula, which stretches toward South America. It’s known for the Lemaire Channel and Paradise Harbor, striking, iceberg-flanked passageways, and Port Lockroy, a former British research station turned museum. The peninsula’s isolated terrain also shelters rich wildlife, including many penguins.

With the world’s fifth-largest country- Brazil, South America stands at No.6, represented by Camila Coelho.

The social media influencer Camila Coelho is so immersed in the fashion world.

If you remember, when we are born, we come out into the world with so many big dreams and ambitions. As we grow up and reality hits, we tend to gradually let go of most of those fantastic dreams.

On the contrary, though, Mrs. Coelho is one of those few folks that kept the fire burning even till this moment. She’s loved fashion all her life, and now she’s an icon to look out for.

In 2010, she launched her fashion and style blog. She also has an Instagram account with a 7million+ following as well as a channel on YouTube that has grown 4million subscribers from her series of very successful tutorials.

She happens to have worked also for the big companies in her niche too.

Forbes has seen her promising as she’s one of “The Fastest Growing Style/Beauty Influencers” in America.

Camila Coelho’s blog, which she named after herself, camilacoelho.com is yet another fertile ground on which the “Influencer Marketer” promotes her lifestyle and fashion collections.

It’s aimed to be a reflection of her homeland, but definitely not only for Brazilians. Women from all walks of life will likely come across something that’ll catch their fancy so long as fashion, styles, beauty, and make-up is concerned.

Through her blog, Coelho tends to be100% involved to make the different products/brands she’s collaborating with reflect “her”.

With Australia, Oceania/Australia continent ceases the 5th position, represented by their own son, Darren Rowse.

Mr. Rowse is probably one of the earliest full-time 21st Century bloggers we have on the list.

He started his first blog way back in 2002, going full time on it.

The 48 years old Australian Darren started his featured blog (problogger.com) in 2004 as a way of keeping the record of all that he learned about blogging and money.

Happily, it turned out today to become an adventure every beginner blogger will like to experience one day.

When he isn’t the Problogger behind a computer screen, he’s an author, a speaker as well as consultant.

Darren is a father of 3 children and also a husband.

On basis of achievements, Problogger as he’s otherwise called, has been mentioned in the Forbe’s “Web Celebrity List of 2007” and he’s also the 2006 “Best Web Developer” according to Weblog.

This blog is the takeoff and landing ground for wannabes, beginner and intermediate bloggers.

It’s a blog geared towards teaching how to go about blogging right from the creche stage, a ton of how-tos for finding traffic, a bunch of SEO Donts and must-dos, how to write quality blog posts… and ultimately how to make money blogging.

Probogger.com was first launched as a way to keep inventory, but now a rippen business for Mr. Darren Rowse.

This site is still the second Technoratis “Most Favorited Blogs” of 2009; though it may have moved from the No.40th “Most Linked-to Blog” on their list.

Pakistan, an Asian country, takes her ground as the 4th in the list, represented by award-winning Syed Moiz Balki.

A rephrase of the above sentence will be that, it’s not actually Mr. Syed himself per say, (he’s not one of the Dick Tigers of this world), but by the wonderful works of his hands, he does;

As a popular writer and entrepreneural figure, The United Nations recognized him, one of the “Top 100 Entrepreneurs Under The Age of 30” and in the same vein, has been featured severally in top sites and magazines such as Forbes, Entrepreneur, Inc, WashingtonPost, FoxBusiness, etc.

This is the so-called largest WordPress resource blog, targeted at WordPress beginners.

WPBeginner is a tutorial blog for all (or at least), most questions that beginners of WordPress may have.

The site is well rounded, from text based content to videos.

Africa stands at No.3 represented by Linda Ifeoma Ikeji of Nigeria.

She was once a model; now a writer and entrepreneur. She hails from Imo state of the eastern part of Nigeria.

Linda began writing at the age of 10. She graduated from the highly esteemed University of Lagos (UNILAG).

From the beginning, she’s always had the passion for creative writing, hence went out of her way to start her first blog site in the year 2006 with our dearest popular blogger.com platform.

Even when it meant going to the nearby Cyber Cafe shop due to the scarcity of internet access as of of 2006 in the country; she would save-up a few bucks to make posts for her blog.

Now, she is so popular that the name ‘Linda Ikeji’ was once the most searched phrase by users of Google in Nigeria.

Forbes profiled Linda as one of their “20 Most Prominent Women”, August 2012.

This blog is a household name in Nigeria, the host country. It’s just a surprise how a sub extension domain website (.blogspot.com) suddenly turned a Money Making Machine.

Lindaikejisblog.com was started around 2006 and was fully launched on a .com domain on September 30, 2015.

In 2013, this blog was the “Best Blog of the year”, also won the “Best Entertainment Blog” of the same year in Nigeria.

Scotland born Pete Cashmore brings Europe at No.2nd on this list of top richest bloggers of the world.

This European-born entrepreneur, Pete Cashmore, is the founder of Mashable.com.

He is 34 years old (1985), born and raised in Banchory Aberdeen, Scotland where he lived with his parents.

Mr. Cashmore created Mashable.com blog at the age of 19, in the year 2005, and has since been recognized as an influential entity in the online game.

He was once named by Forbes as one of the “Top 20 Web Celebrities”, and also the Huffington post’s “Top 10 Game Changers” in 2009.

Noteworthy also is that Mr. Cashmore (the “Sage of Media”) is no longer with Mashable as of 2017 but still remains the founder.

Mashable.com is a popular news resource website that caters for a connected global audience.

Since 2005 of its founding, the blog has grown into a multi-platform information resource in the media and entertainment industry.

As the usual common grass-to-grace storyline of almost every successful blog, Mashable.com started as an ordinary WordPress site, nothing else attached, with Mr. Cashmore as the author and editor in chief, marketer as well as the advertiser…

In just 4 years of existence, Times Magazine mentioned the young WordPress blog as one of the “25 Best Blogs of 2009”.

If you really love science and technology and likes getting updated news about the latest happenings in that sector, then this name should probably sound familiar.

This 45-year-old Harvard graduate has, even before clocking 18, harbor an unusual passion for technology and all its dealings.

In the year 2007, Peter Rojas found himself a wife whom he also later initiated into the blogging world of CONTENT.

Mrs. Fehrenbacher, Mr. Peter Rojas’ wife, later founded herself a blog too, after the birth of their first son.

From the horse’s mouth, it reads: “Engadget is the original home for technology news and reviews”.

This description in a nutshell, summaries what Engadget.com in its full sense, stands for, their mission and vision.

The blog capitalizes on the promptly reportage of tech breaking news.

And just as the name suggests, Engadget also has their foothold on the review of technological gadgets.

And there you have it. A list of the top world’s richest bloggers, their blogs, and worth. You likely have something to say, let’s hear you in the comments.